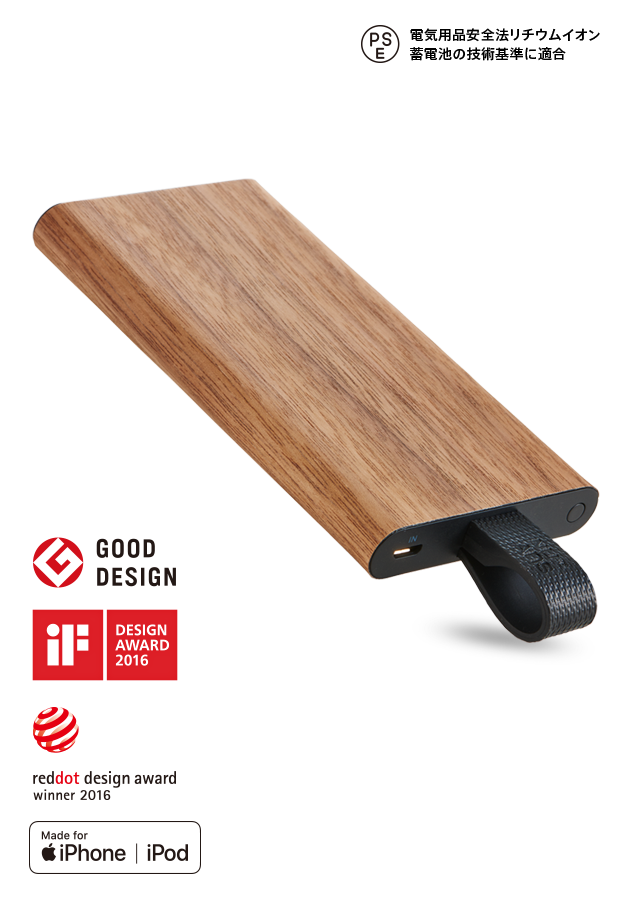 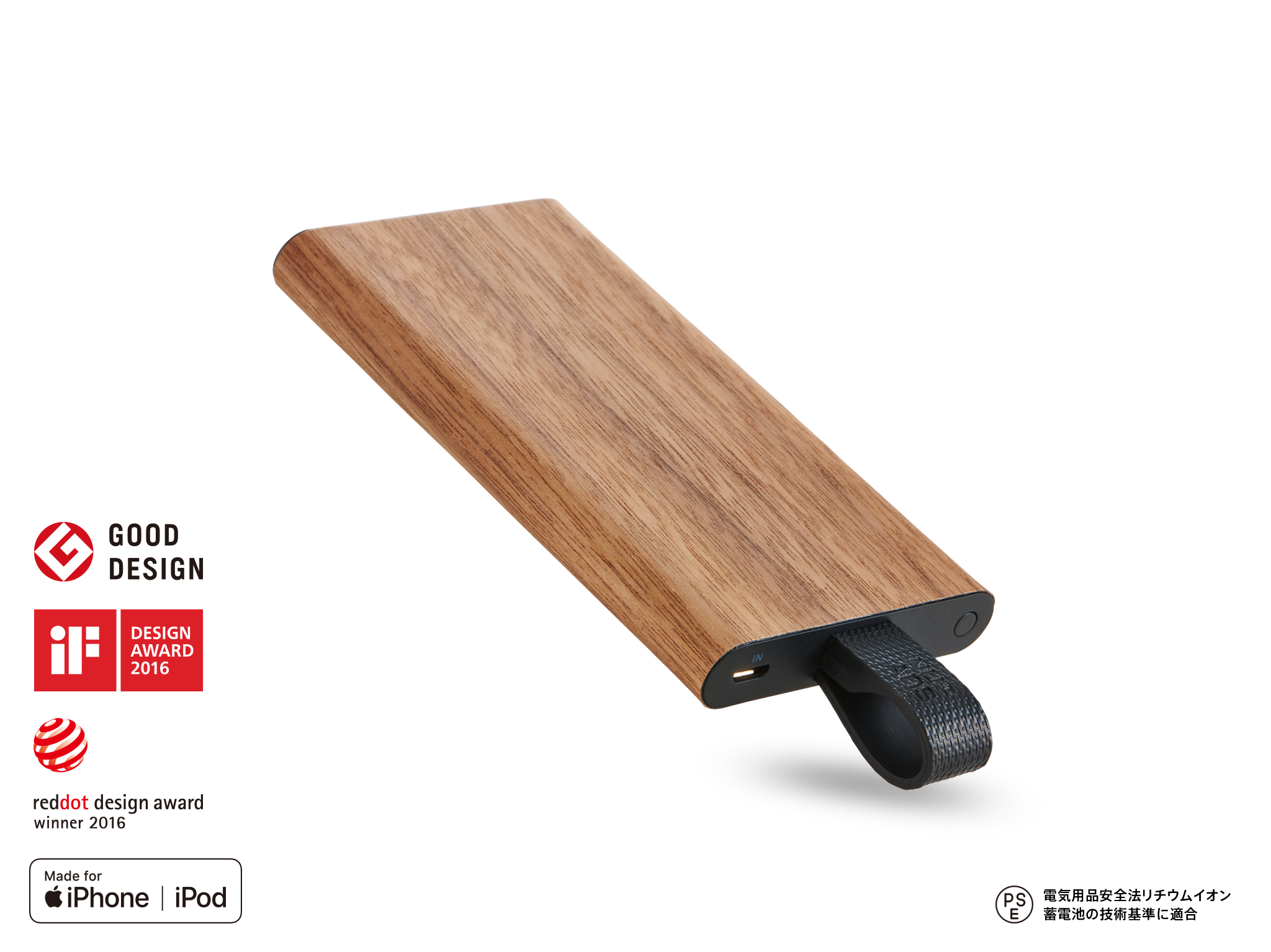 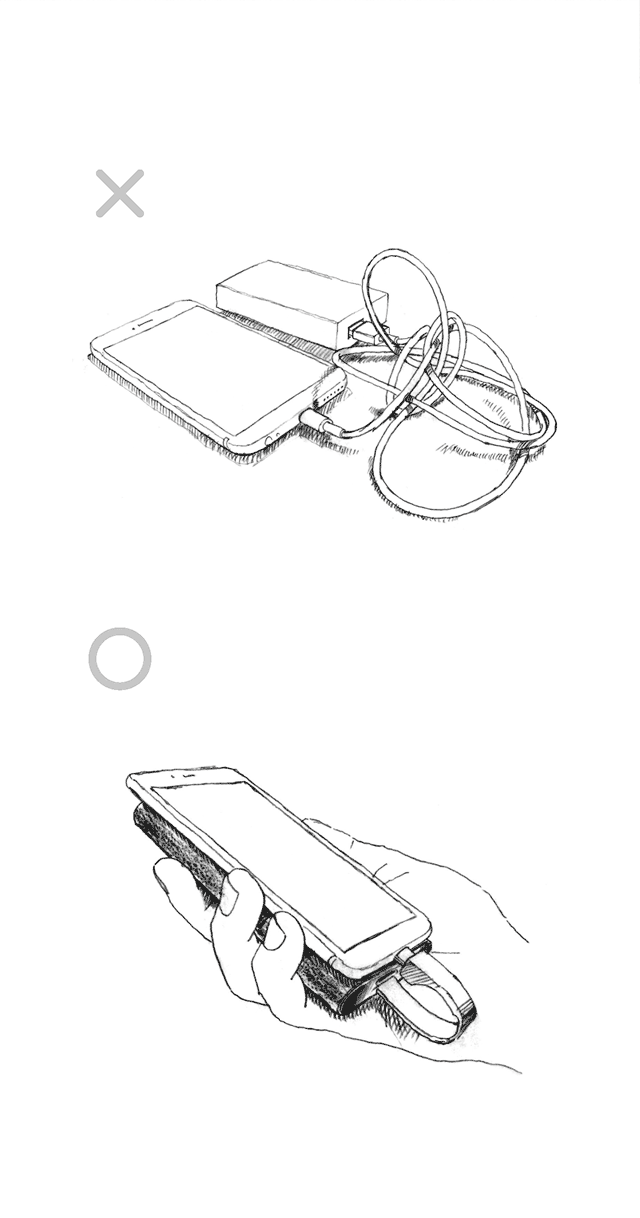 A thin mobile battery that contains a Lightning cable for charging iPhones. The tag that is attached to the battery body becomes a cable, so it’s easy to take out for use and easy to put back in for storage. All metal components are easily hidden upon storage, so you don’t have to worry about the cable damaging any of your other items. One full battery charge will charge an iPhone approximately two times. 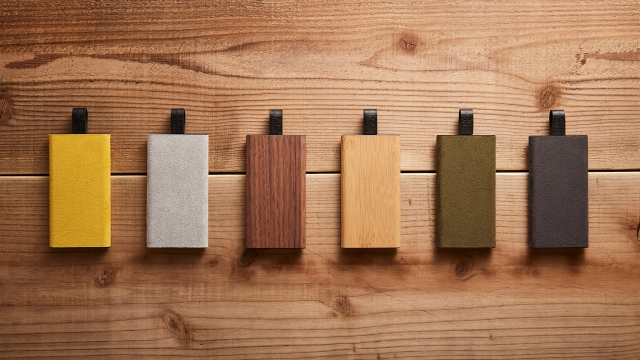 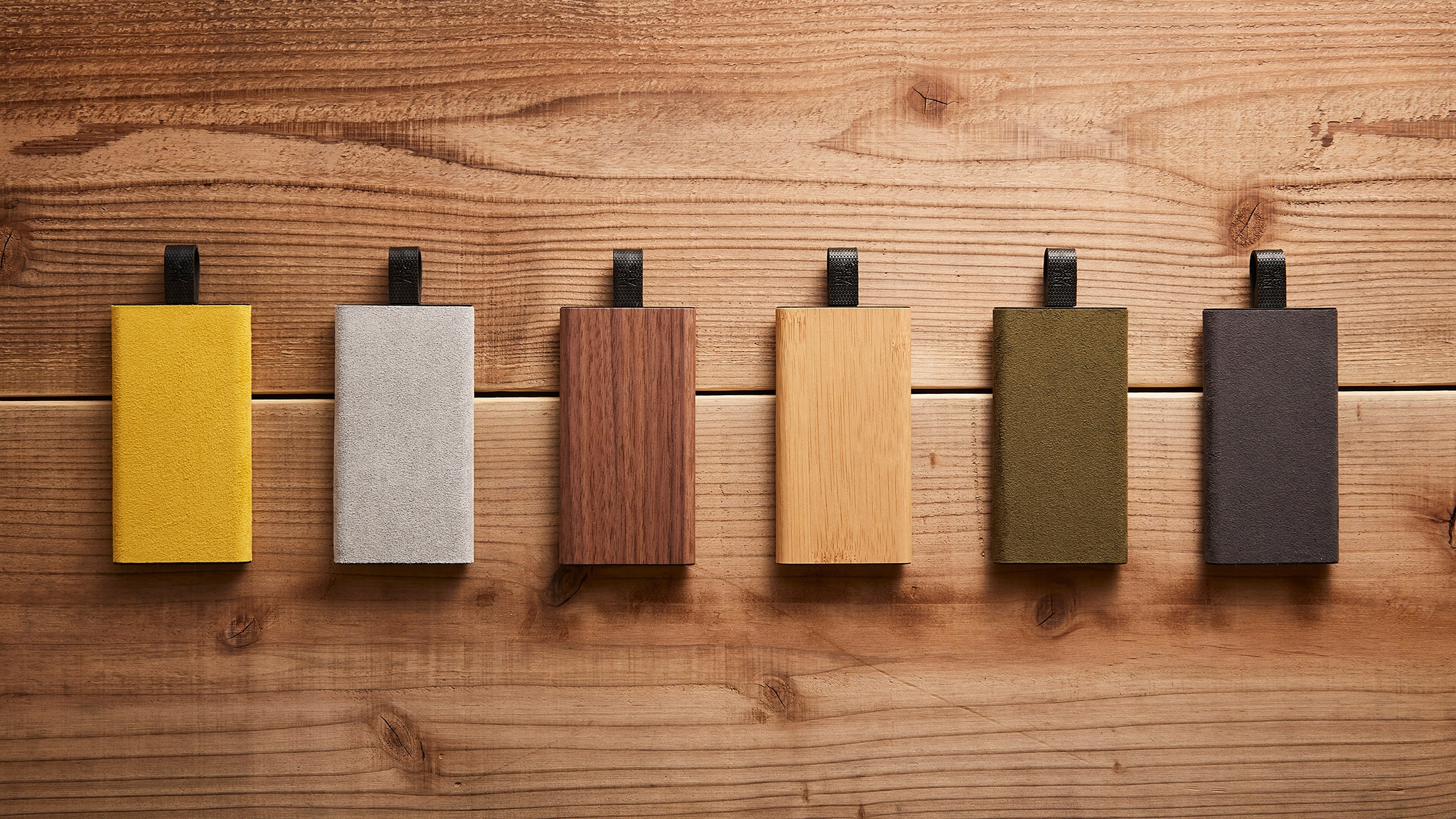 TAGPLATE is a thin high-capacity mobile battery that contains both a Lightning cable to charge an iPhone or iPod and a USB port to charge the battery.

This 6000mAh capacity battery can fit easily into your bag or pocket, because it is only 14 mm thick. It is a comfortable size to carry together with your iPhone and the USB port and Lightning cable are easily accessible. 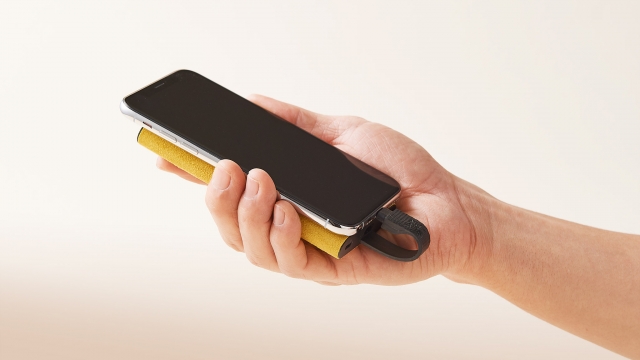 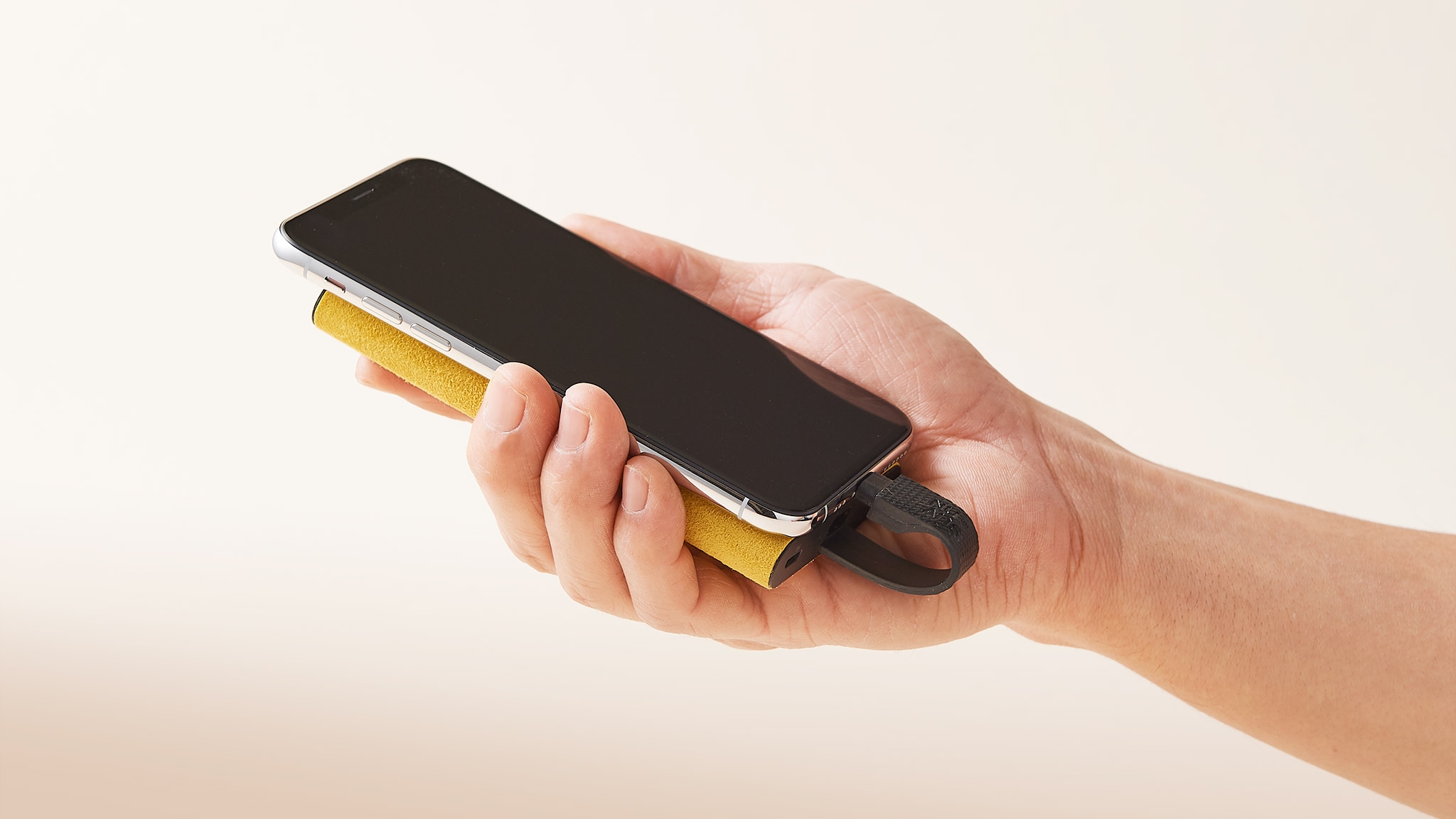 “I tried to charge the phone outside, but I forgot my cable!” Everyone experiences that scenario. Even though we have a mobile battery, it can’t transfer the charge to your iPhone or iPod without a Lightning cable.

TAGPLATE can solve this problem because the tag-type Lightning cable is attached to the battery body. 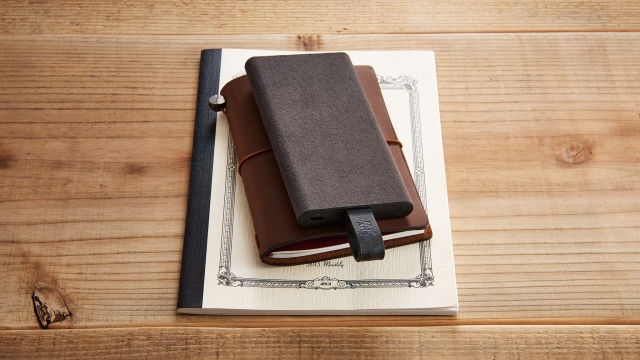 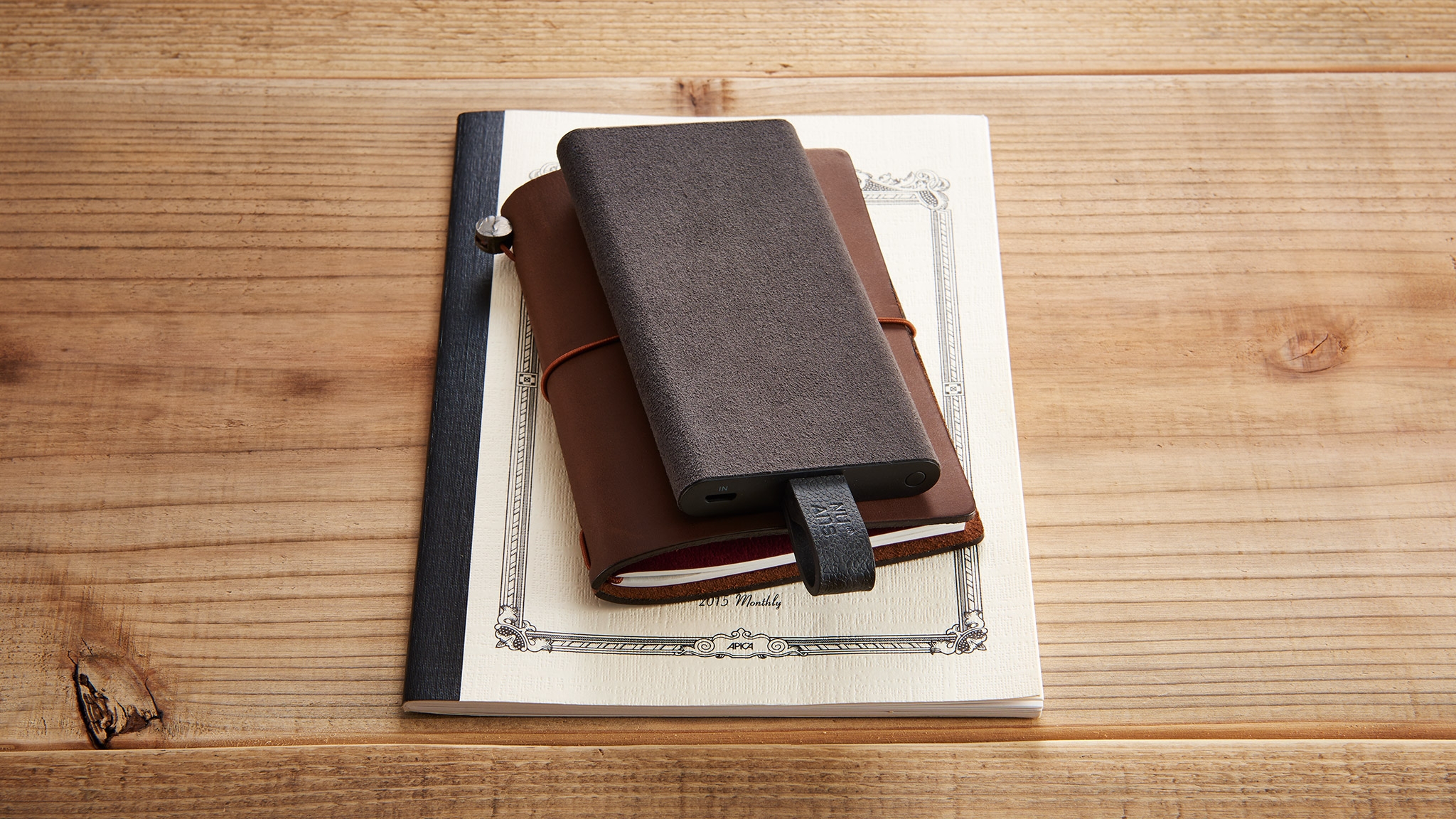 TAGPLATE can achieve 6,000mAH (3.7V) by using high-efficiency lithium polymer. It can fully charge an iPhone approximately two times.
* It varies depending on the usage.

It also can receive 2A maximum input voltage to charge a mobile battery, enabling it to fully charge an iPhone in 5 hours. 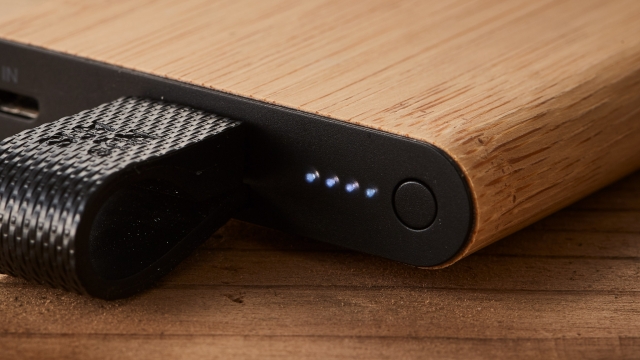 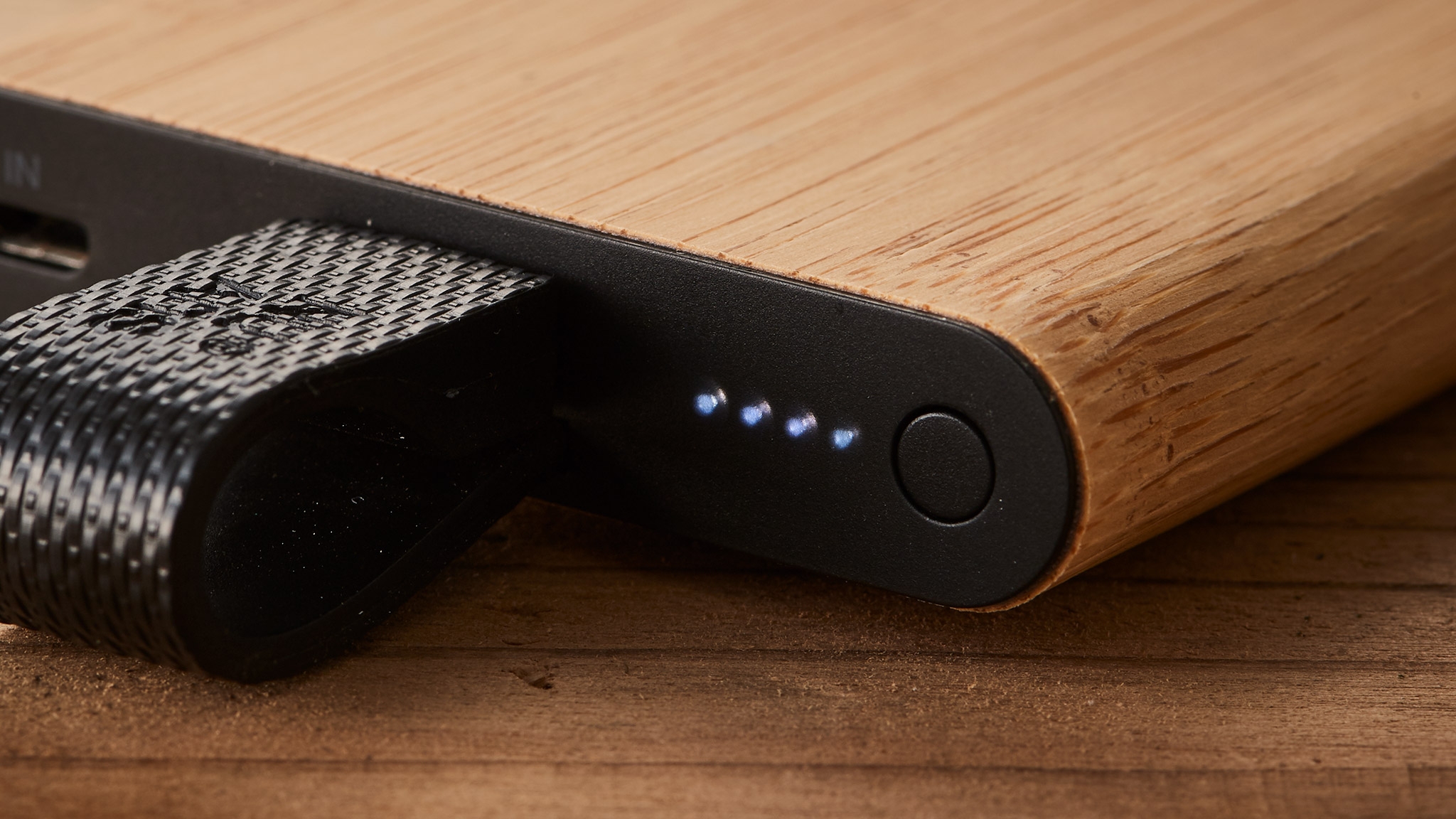 LED indicator shows the remain battery at a glance

4 LED lights show the current battery level when you turn the switch on. 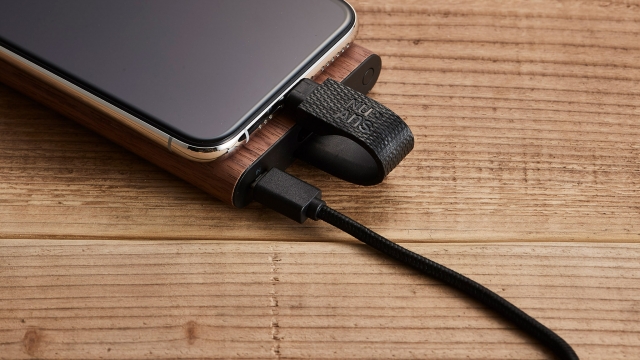 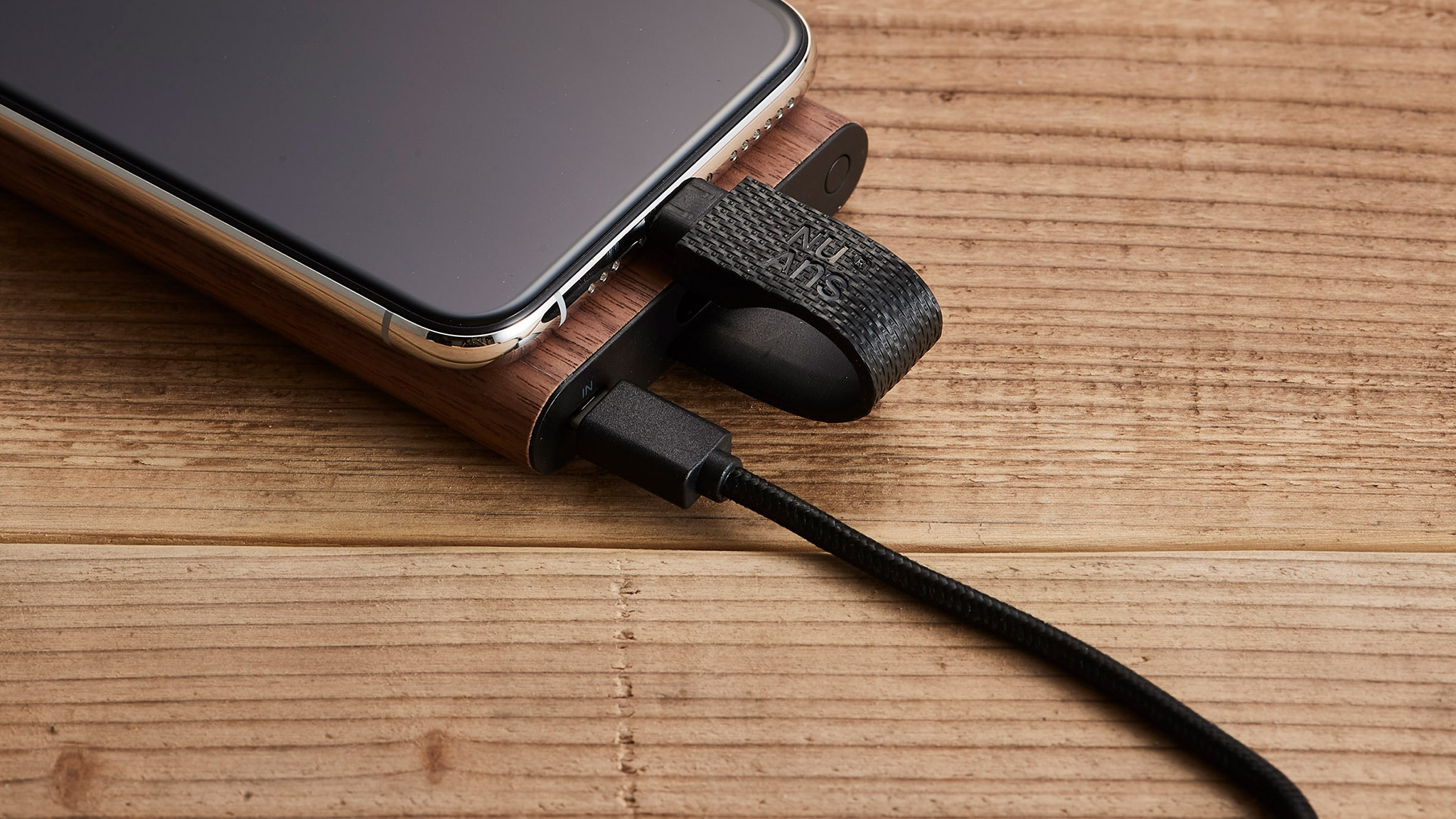 Attach the micro-USB cable to charge

The micro-USB cable is designed with extra durability. It is textured, unlike a normal cable, to give a united look and feel to the whole product. An ‘S’-shaped-hook with the NuAns original logo is also attached as a bonus cable manager. 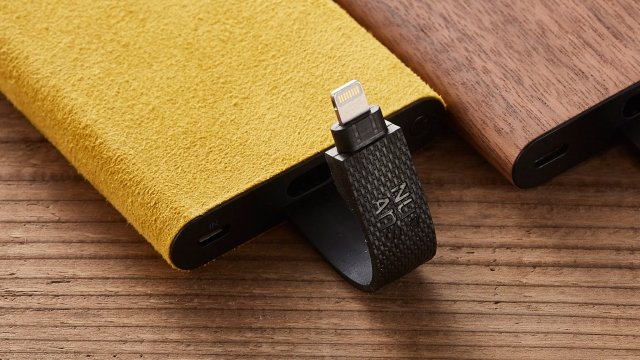 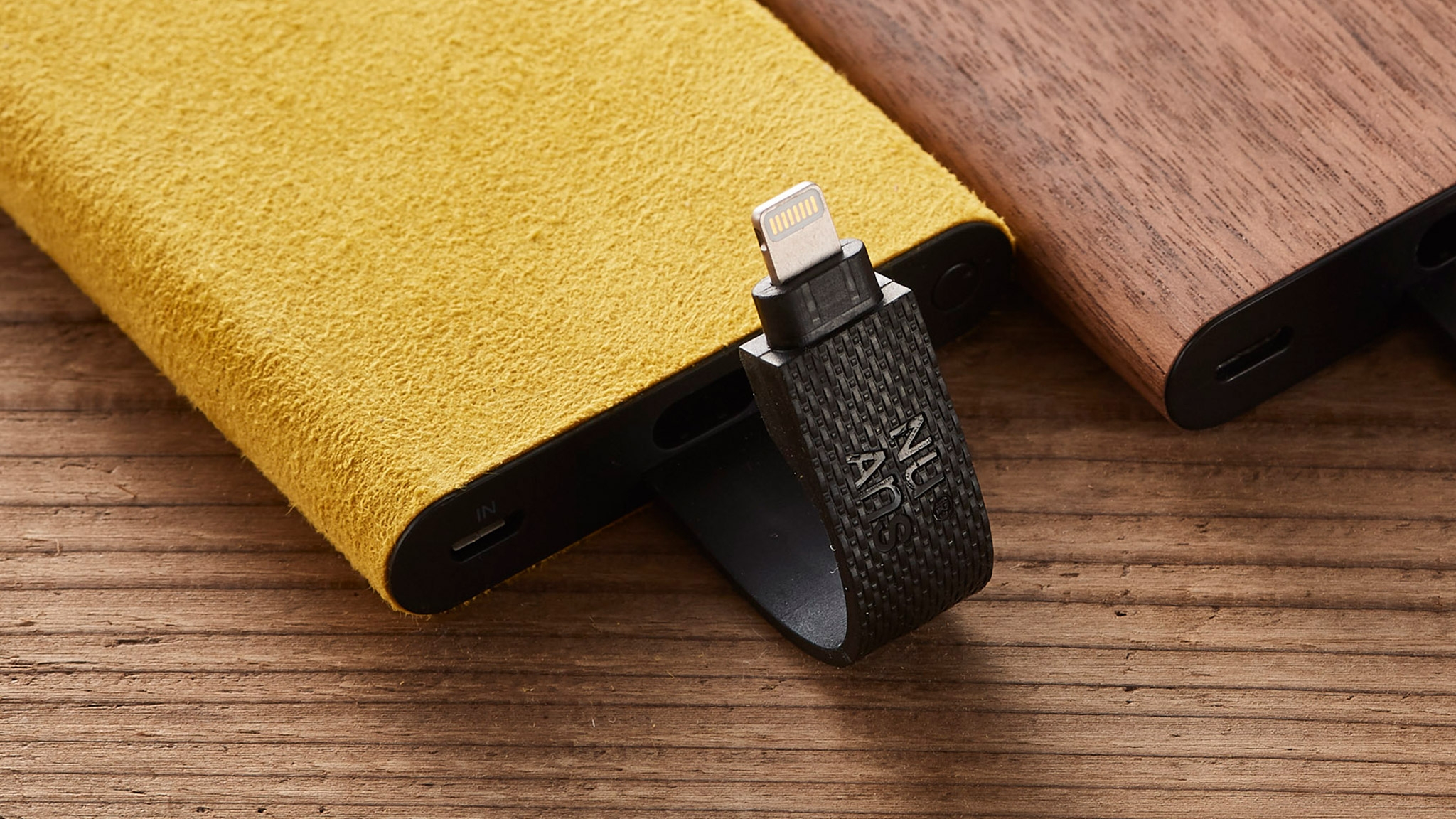 It will not damage other goods

TAGPLATE Lightning stores the metal ends of the cable so they won’t damage other items in a bag or pocket. It also protects the end terminals from getting damaged or dusty and ultimately the neat design provides a clean and organized look. 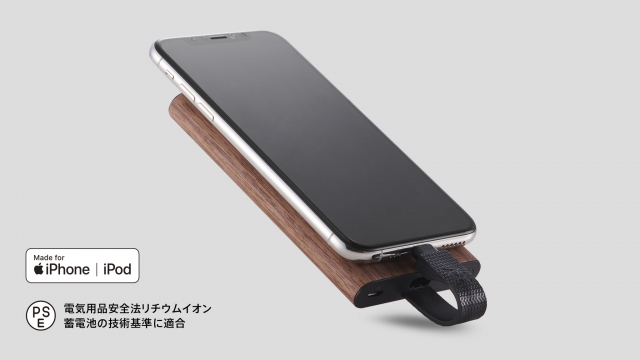 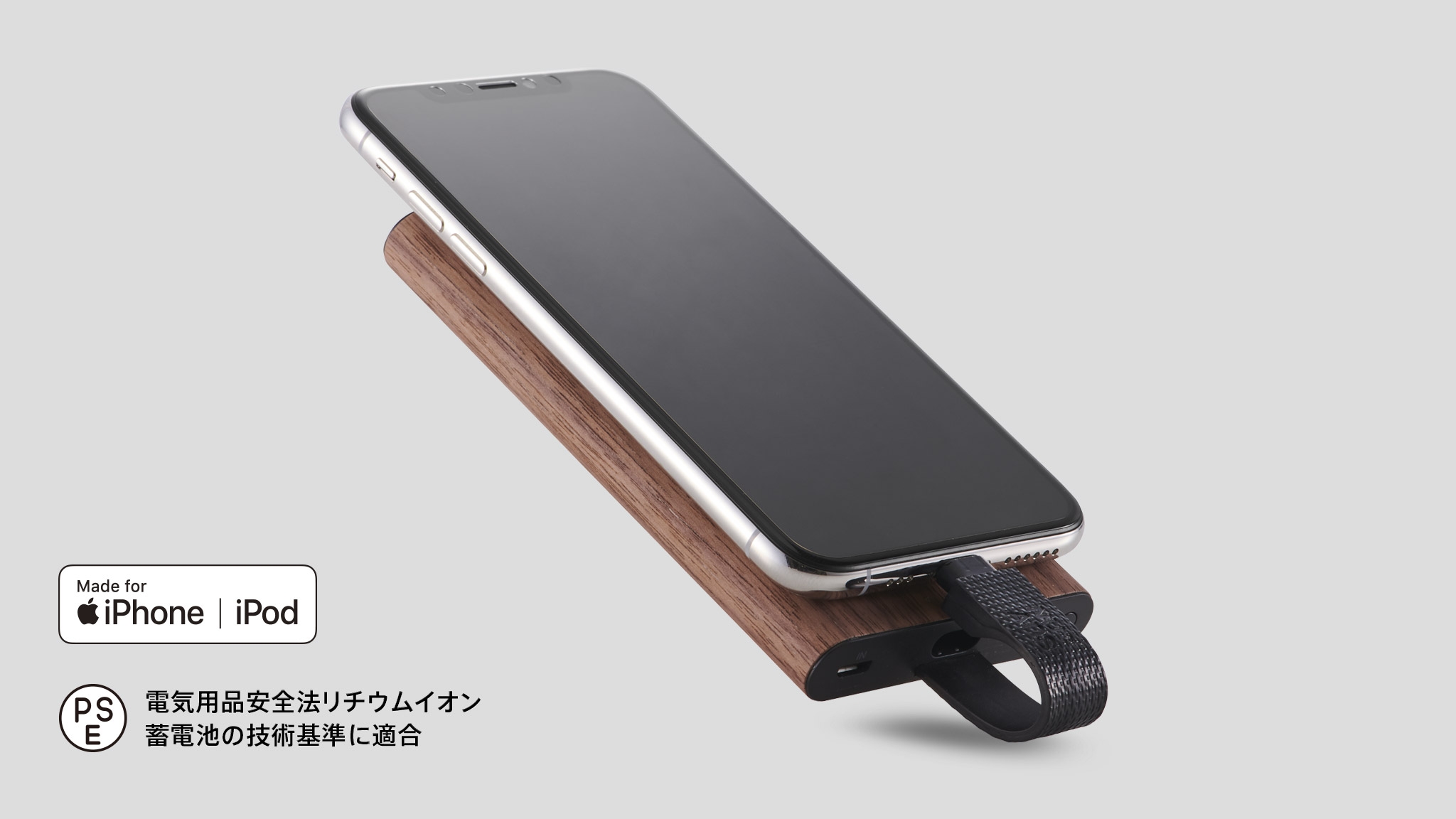 MFi is a guaranteed license program for iPod and iPhone to meet Apple’s performance standard.

There are many complaints about cheap, non-licensed products that can not charge or have a slow synchonization speed. TAGPLATE meets Apple’s performance standard so you can use it safely and with confidence. 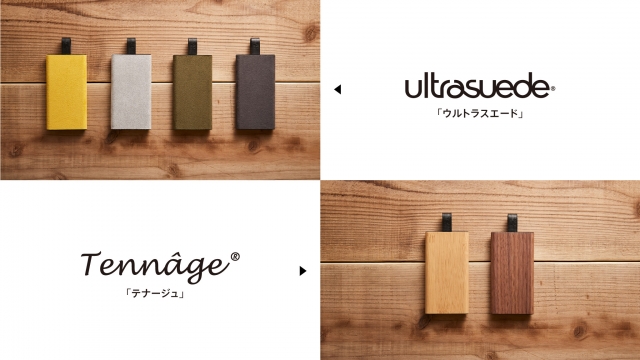 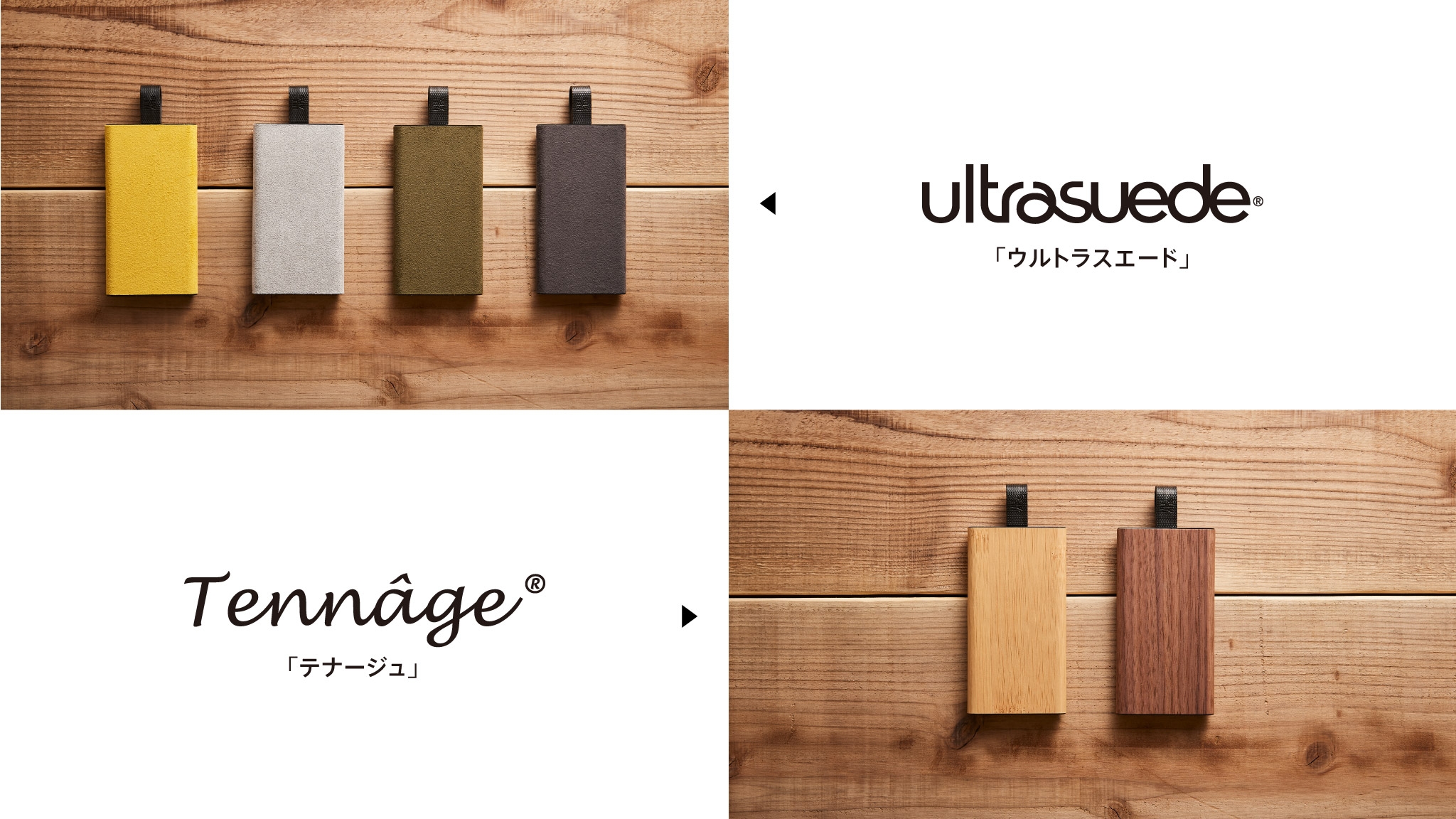 A texture and touch that has ‘nuance’

The soft texture of material covers the battery, making it attractive to carry with your iPhone or iPod everyday, as well as blend into the atmosphere around. A little ‘nuance’ is added to your stylish living and working environments with its elegance.

“Tennage” is a flexible and durable real wood sheet. Special reinforcement process is applied to thinly sliced real wood without losing the beauty of wood grain and the natural look and feel of the wood itself.

“ULTRASUEDE” is the material developed through Toray’s advanced fiber research and development. Resistant to aqueous liquid or stain, soft touch with luxurious texture and feel of premium suede. 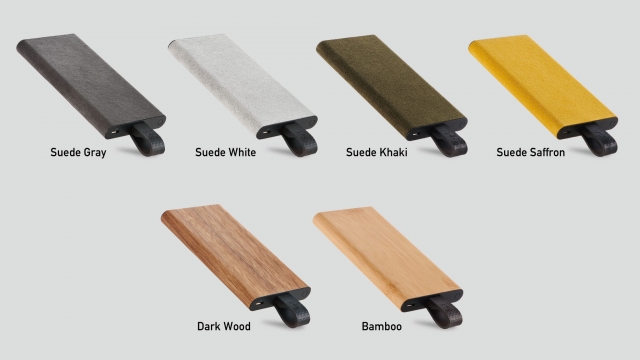 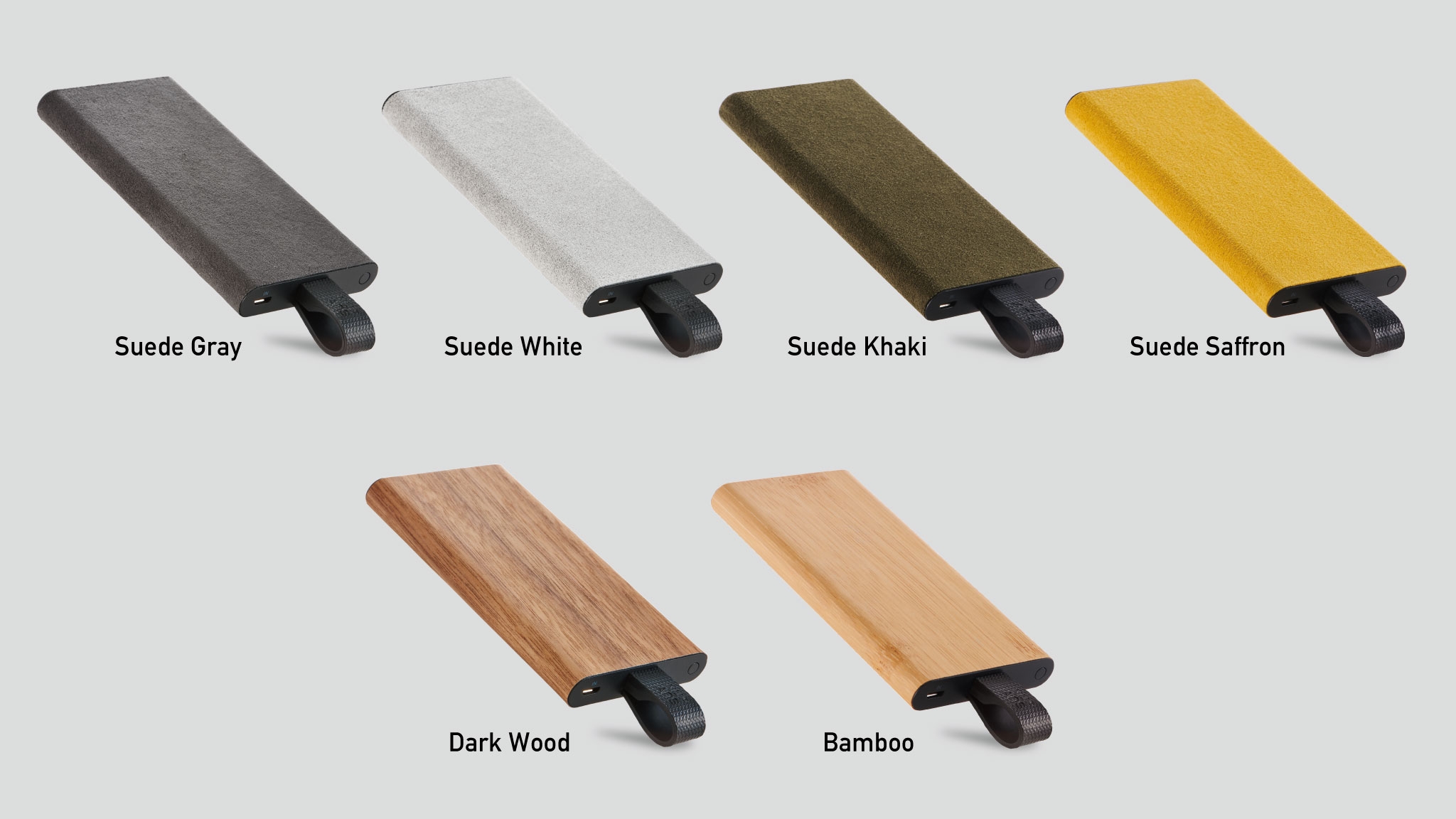 6 “Earth-tone” color variations to blend nicely with your surroundings

6 “Earth-tone” colors to blend into the inside of a bag, or on top of a desk.

Whenever I always carry on a mobile battery charger, I put both the charger and its cable into small bag, so that I thought I wanted to have more useful and compact charger when charging, when carrying it on to bring it, since it is not always use.

I sometimes saw the pesron who hold both mobile battery and cables with iPhone, in the train.
I came up the idea for the mobile battery which can use it togther naturally.

TAGPLATE is created, which is new type mobile battery charger which allow us use the iPhone while charging. You do not need to carry the cable like when you use the normal charger. All you have to bring is this charger only. The charger is covered by the ULTRASUEDE or Tennage material, and the elastomer is used for the tag-type terminal not to damage items in your bag while carrying this battery charger.

By keeping enough battery size (able to fully charge iPhone two times), considering easy to carry with iPhone, making the size to test the best weight, thickness, and making the cable part with same structure as BANDWIRE, it enabled to make the shortest Lightning cable and look like product tag when not charging.

Regarding the elastomer of the Lightning part, it had been faced many difficult problems until we made the finalized one, because there was very difficult manufacturing process which embeded from the root to the cable to the thinest part.